Equity markets are painting a confusing picture, trading at all-time highs despite the ongoing pandemic and its impact on the real economy. Indeed, the jobs report last week posted a larger than expected decline in non-farm payrolls.

This month we seek to situate current markets within historical business/monetary policy easing cycles and evaluate its implications for forward looking market returns.

In our December 2019 newsletter, we investigated stock market performance during NBER recessions and showed that average compound annual returns during NBER recessions were -1.1% historically, but in a handful of cases, saw above average (10%+) compound annual returns over the same period. The current recession falls into latter category where returns have been positive and above the long-run average despite seeing economic contraction. In 2020, the S&P 500 printed a +18.40% gain, just shy of the 23.5% increase in M2 money supply (for various reasons described last month).

Because the NBER business cycle dating committee is a lagging indicator (sometimes months behind the market), this month we turn to the 5y/30y U.S. Treasury yield curve as a leading market indicator of the business cycle and seek to situate current markets in that context as well as derive insights on forward returns.

The yield curve and the business cycle

The chart below shows the evolution of the 5s30s yield curve over multiple monetary policy cycles since the beginning of the Greenspan era in 1986. The cycles that emerge from the chart below clearly delineate business cycles since the mid-1980s. Specifically, the 5s30s yield curve steepens during downturns (1990/1991, 2001/2002, 2008/2009), holds steady, then declines late cycle as the Fed steps on the brakes to cool down the economy. 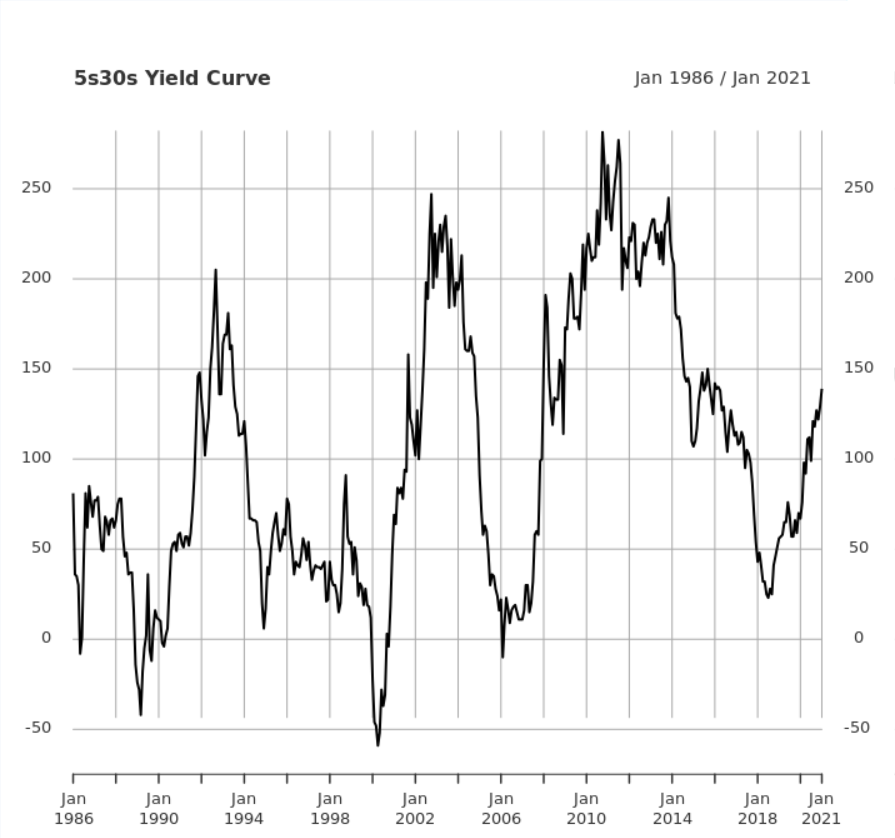 To map the current cycle, we create a dataset by mapping each of the 5s30s curve levels above to their corresponding 6-month historical change. We then turn to hierarchical clustering, an unsupervised machine learning technique, to analyze our dataset. Hierarchical clustering groups similar objects into clusters by measuring the distance between objects in the sample. The analysis we perform here measures similarity in in terms of each combination of curve level and curve level change. The chart below plots the resulting clusters. 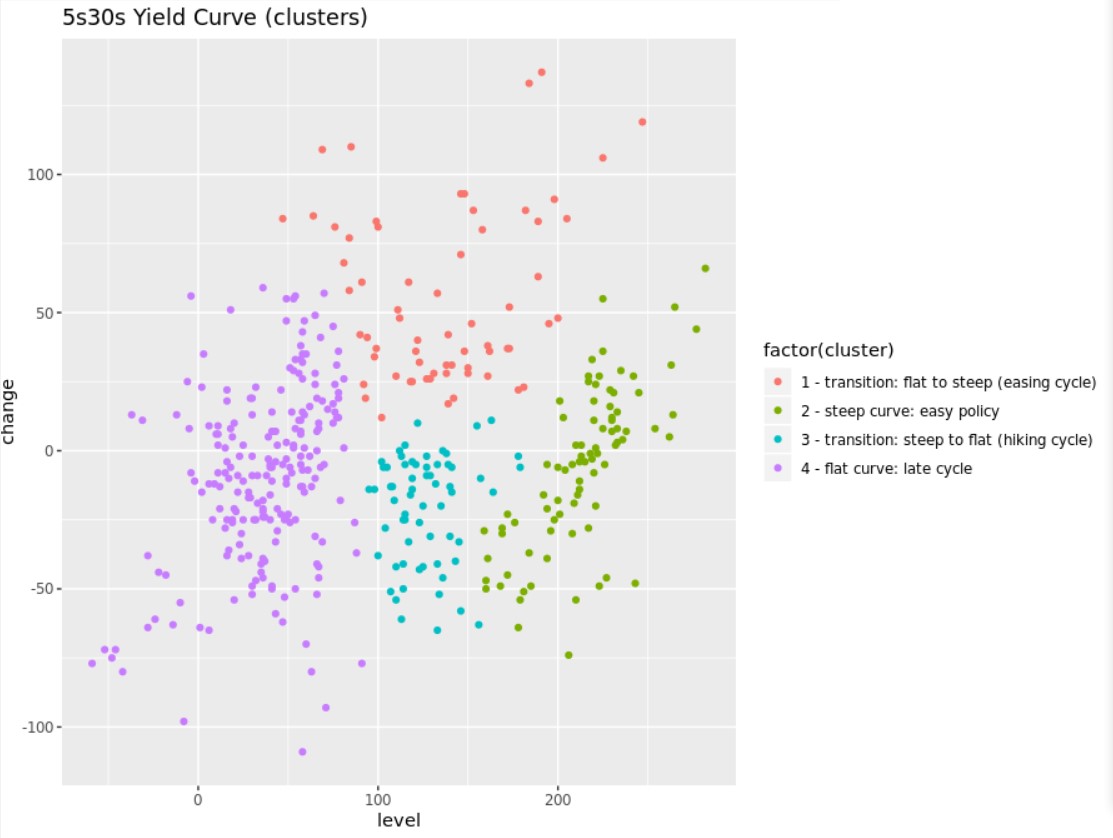 The clusters that emerge from the hierarchical clustering algorithm are intuitive and clearly identify (i) a flat curve regime (level below 100, in purple), (ii) a steep curve regime (level above 175-200, in green), and (iii) two transition regimes (in red and teal). The two transition regimes are differentiated based on whether (a) the 5s30s curve level was rising in the past six months (monetary easing, in red) or (b) falling (hiking regime, in teal).

Messages from the yield curve

Turning to the outlook for forward returns, the table below tabulates average annualized returns for the S&P 500 (1) during, (2) in the 6 months after, and (3) in the 12 months after each regime, respectively.

Cluster 1, which is associated with an easing cycle (in red in Figure 1) that sees the transition from a flat curve to a steep curve, has the lowest returns. This makes sense given that the FOMC typically embarks on an easing campaign as a response to a decline in the economy.

Cluster 3, which is associated with a hiking cycle (in teal in Figure 1) that sees the transition from a steep curve to a flat curve, represents tightening monetary policy where the FOMC is actively raising short-term rates to cool down the economy. Unsurprisingly, that markets do not respond well when the FOMC takes away the punch bowl.

As things currently stand, the 5s30s yield curve is at 139 basis points with a rise of 42 basis points over the past 6-months. The current market falls squarely in Cluster 1, the transition from a flat curve to a steep curve, where forward returns are not promising. While the market can expect a robust recovery once it enters Cluster 2, the recovery stage, the 5s30s yield curve needs to rise another 40 to 50 basis points before it reaches that stage, at least as determined by our clustering analysis above.

Combined with our analysis from November 2019, where we show that stock market performance in the first and second years of a Presidential term underperform the third and fourth years, we remain cautious on the 2021 outlook for U.S. equity markets. Until the combined wisdom of the bond markets enter Cluster 2 (5s30s curve above 175/200), which perhaps may occur later this year if the U.S. reaches herd immunity, investors should remain nimble.