March saw the COVID-19 pandemic explode across developed market economies, most notably in the United States and Europe. Governments imposed lockdowns that brought consumer travel, leisure, dining, and entertainment activities to what is essentially a total halt of indefinite length.

As a result, markets crashed precipitously. At its extremes, the S&P 500 fell over 30% from its February peak. The speed of the crash was the fastest on record, swifter than even the crashes of 1987 and the Great Depression. Credit markets were seized by a vicious cycle of panic, margin calls, and forced liquidations into a falling market that caused the collapse of leveraged loan and REIT markets. Corporate bond liquidity dried up and the markets for commercial paper used by large corporations, states, and municipalities to finance routine operations seized. These liquidations reached even the U.S. government bond market as balance sheets dedicated to housing and financing the $18 trillion market were pared back causing wide pricing dislocations and significant impairment to market liquidity.

Policymakers responded forcefully. The Federal Reserve cut interest rates by 150 basis points (effectively to zero), committed to unlimited quantitative easing, and revived the alphabet soup of emergency lending programs introduced during the Great Financial Crisis. These activities inflated the Fed’s balance sheet by over $1.6 trillion in March. The European Central Bank likewise announced its own €750 billion purchasing program. On the fiscal end, Congress passed three major stimulus bills, culminating in the historic $2 trillion CARES Act; a potential a fourth stimulus bill is on the way.

Pricing the impact of COVID-19

We view the market decline in March as pricing in the first-order effect of higher risk premiums associated with the uncertain impact of COVID-19 on developed markets. In a recently released draft paper by the National Bureau of Economic Research (Alfaro et al., 2020), the authors show that changes in aggregate stock returns are forecasted by day-to-day changes in the predictions of simple models of the spread of infectious diseases. For this month’s commentary, we produce a simplified model of the same using data from the Johns Hopkins Center for Systems Science and Engineering.

Modeling the spread of infectious diseases begins with a time-series of the number of new cases reported each day (known as the daily incidence). 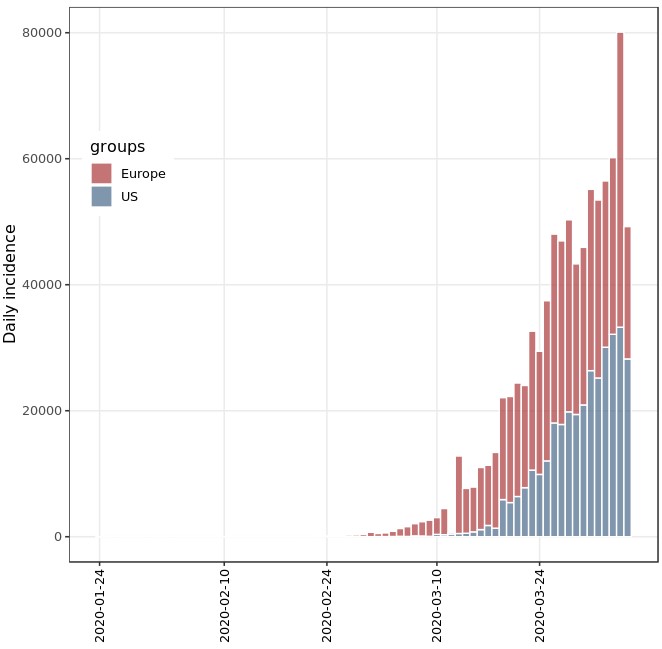 However, daily incidence is noisy. It’s difficult to tell whether a day-to-day increase or decline is significant, or simply just noise. Daily incidence, by itself, is not a reliable way to gauge the spread of pandemic disease. To address this, we could instead use a time-series of daily incidence to make rolling estimates of the daily growth rate of a pandemic based on a simple model. The simplest model, called the exponential model, assumes that each individual spreads the virus at the same rate, which has the effect of increasing infections exponentially over time. As pointed out in Alfaro et. al, this model is consistent with early stage pandemic growth patterns.

By making rolling estimates of the growth rate, r, updated daily based on the latest available data each day, it is possible to obtain a more accurate gauge of the spread of pandemic disease. Where incoming data is close to what the prior day’s estimate predicted it would be, then the updated growth rate would be relatively unchanged from the prior day. Where incoming data is significantly greater or smaller than predicted, then the updated growth rate would increase or decrease, respectively. By tracking the evolution of the estimated growth rate, it is possible to determine whether incoming data should be read as being within expectations, or alternatively as a positive/negative surprise.

The chart below plots the rolling estimated daily growth rate r for Europe and the United States using all data available as of each day in the time period January 24 up to and including April 5, 2020. 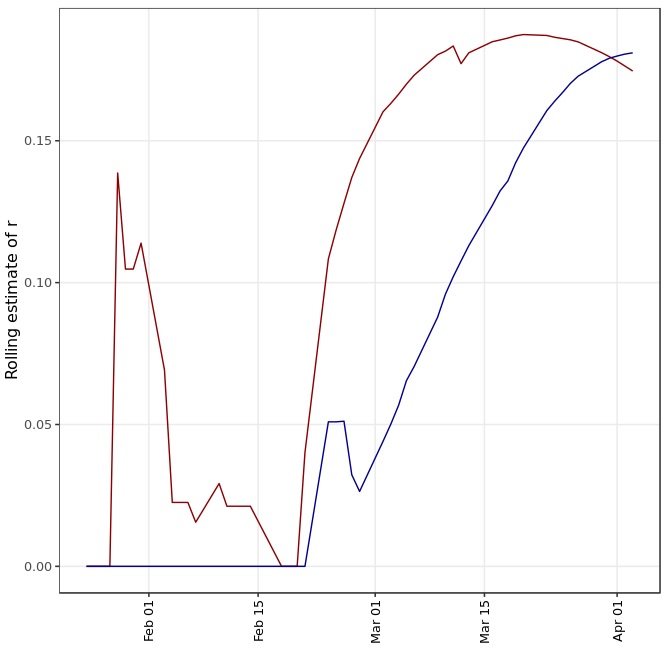 The rolling estimated daily growth rate r rises quickly beginning early March, led by Europe (red). The U.S. follows a similarly steep but slightly shallower path (blue). This steep rise in rolling estimates of r in the first half of March reflects a series of upside surprises in the expected growth rate of the pandemic and thus the potential severity of impact on the global economy. Policy makers and market participants alike were caught by surprise. By March 20, rolling estimates of the growth rate peaks at around 18.7% in Europe and begins to taper thereafter. In the U.S., the rolling estimates continue to surprise to the upside, but more recent data coming out the first two weeks of April suggests that incoming data is beginning to print below expectations and may be starting to decline from its peak of around 18% on April 3.

Taking inspiration from Alfaro et al, to see if this gauge is a useful indicator for market returns we perform simple regression analysis of the rolling estimated daily growth rate r versus the cumulative returns on the SPX and DAX indices using data from January 24 to April 3. Results show that rolling estimates of COVID-19 growth rates in Europe and the U.S. are significant at the 1% and 0.1% levels, respectively. 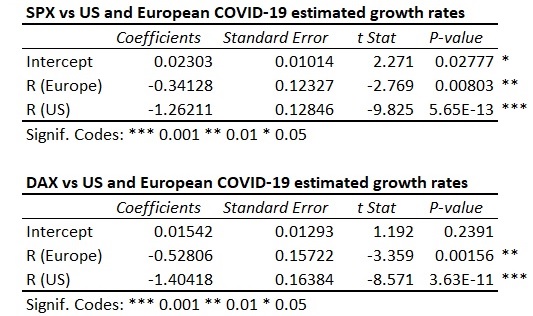 The plots below show the fitted returns for the S&P 500 and the DAX based on the models above versus their actual cumulative returns from January 24, 2020 to April 3. The results are striking. 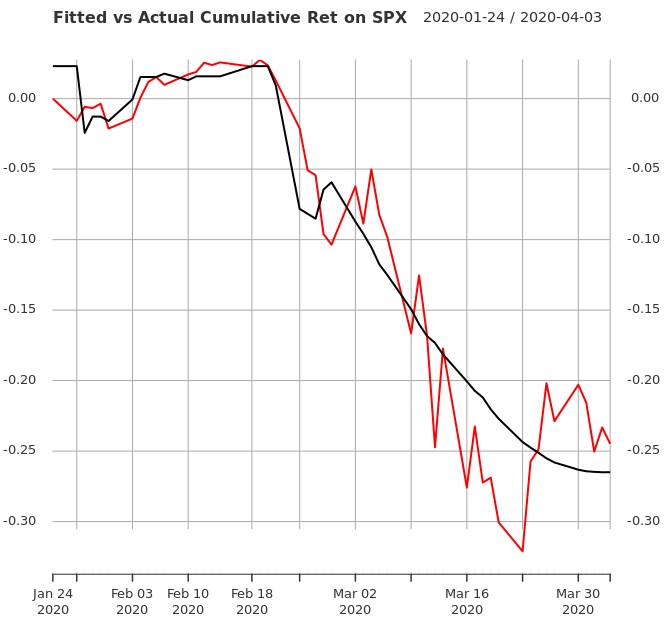 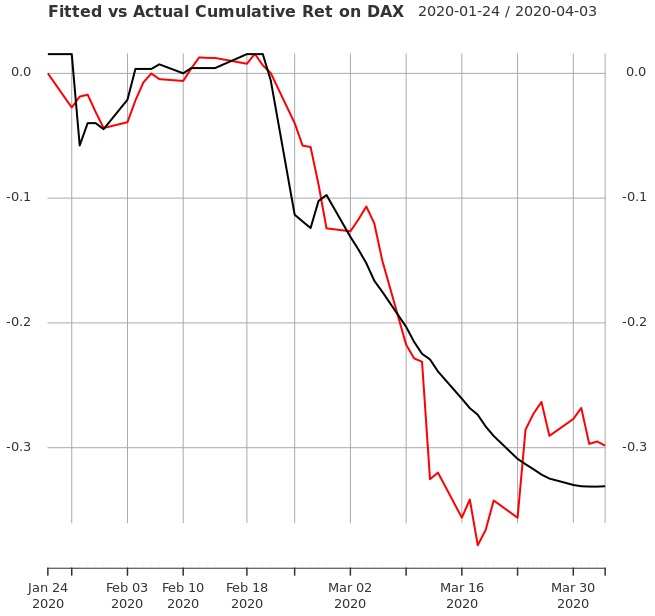 While a couple down days does not make a peak, given the strength of this relationship and recent tapering of estimated growth rates in Europe and the U.S., it would be reasonable to expect the first-order market impact of  upside surprises to the spread of COVID-19 to fade in coming days. That may signal the end of this initial (and panicked) market repricing of risk premia and a transition into a more drawn out phase during which the market begins to deal with the second-order real economic impact of the pandemic. We will be tracking these measures closely.

Where we go from here

Even if the first-order market impact of upside surprises to the spread of COVID-19 fades in the short term as our prior analysis suggests, we believe there is plenty of reason to remain cautious on equities.

First, it is still possible that the estimated growth rate will re-accelerate as the pandemic spreads. There is also the possibility of an echo wave of infections when the weather cools down in the fall. As such, even if daily growth rates for COVID-19 continue to taper over the coming summer months, we may find ourselves dusting off these models soon after.

Second, whether the coefficients that arise from our simple analysis of the effect of the spread of COVID-19 (-1.26% S&P 500 for each 1% rise in daily growth rate) are reasonable from a valuation perspective is beyond the scope of that analysis. Valuations will ultimately depend on the magnitude of the second-order impact of social distancing and shelter-in-place on corporate earnings, real economic growth and attendant dislocations to labor markets, small businesses, and the economic landscape. There is much uncertainty around these effects and the true impact will be difficult to gauge.

Third, current equities valuations are not far from their “fair” values. Below we reproduce a chart from our January commentary that estimates fair-value PE ratios based solely on the 10-year Treasury yield, which at the time of writing stands at 0.71%. 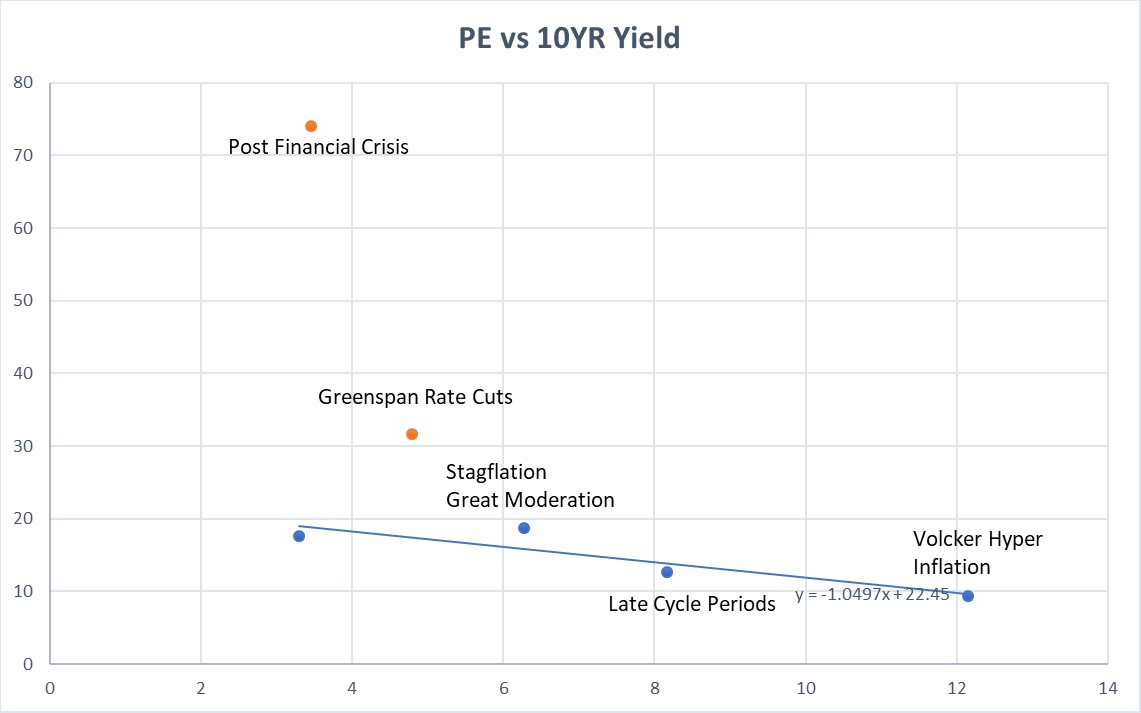 This simple model suggests that the “fair value” PE ratio for the S&P 500 with 10-year yields at 0.71% is roughly 21.75. With the PE ratio at 20.04 as of the close of April 6, there is less than 9% “fair value” upside from current levels, even assuming 12-month trailing earnings hold firm—a shaky assumption given incoming data on the labor market.

Finally, S&P 500 volatility remains elevated at over 40% annualized, well above its long run average. Because of limited “fair value” upside, uncertainty regarding significant issues, and unstable and elevated daily market fluctuations, we do not find that the broad equity market provides favorable risk-reward in the medium term. Investors should remain wary.