May was generally quiet, and economic data continued to suggest strong momentum. In Europe, the pace of vaccinations caught up quickly and the heightened COVID restrictions originally imposed in April were relaxed. In the U.S., April CPI (released in May) showed a 4.2% year over year increase in CPI inflation, the fastest pace since 2008, though the Fed continues to hold that the rise is temporary and attributable to base effects from depressed readings a year ago due to COVID-19. However, anecdotal evidence of supply side constraints, such as steel and semi-conductor shortages in the auto industry, and bottlenecks at key global trading ports coupled with well-supported consumer demand through fiscal stimulus, suggest that upward pressures may continue in the near term. Persistent inflation beyond July would make it difficult for the Fed or anyone else to argue that elevated readings are due solely to base effects.

In the labor market, the monthly NFP jobs report released last Friday fell short of expectations for the second month in a row. As with the goods market, market commentary focuses on supply side constraints in the labor market. Anecdotal evidence suggest that a combination of disincentives from expanded unemployment benefits and workers leaving high cost-of-living urban centers have made it difficult for those in the service industry to hire new staff. Childcare responsibilities have also been cited as a potential obstacle preventing primary caretakers in U.S. households from returning to the labor force.

Consistent with these inflationary concerns, global central banks have begun to shift tack. The Bank of Canada started tapering in May, citing a more optimistic outlook for the recovery, while the Bank of England slowed its purchase pace. In a surprise move, the Reserve Bank of New Zealand upgraded its assessment of the economic outlook and dropped its reference to further potential cuts in its official policy statement. In the U.S., recent Fed speak from voting members of the FOMC have become more open about “talk[ing] about talking about taper.” Since these conversations typically span multiple meetings, expectations are for tapering to begin by Q1 2022 in the U.S. and no hike until sometime in 2023.

With central banks debating whether recent inflation will prove transitory or persistent, this month we examine the performance of equities under various inflation regimes.

The pandemic’s shake-up of spending

Unlike typical business cycle downturns, the recession induced by COVID-19 rapidly and drastically changed consumer shopping and spending patterns as well as the way consumers live and work. This is illustrated by the comparative performance of the S&P 500’s constituents’ industries. Below we tabulate the weighted average percentage change in corporate net income between Q1 2019 (pre-pandemic) and Q1 2021 (post-pandemic) by industry sub-sector. We show both the top 20 and bottom 20 below. 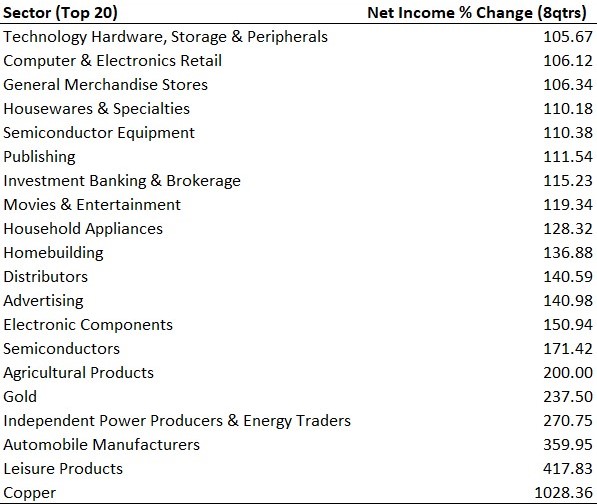 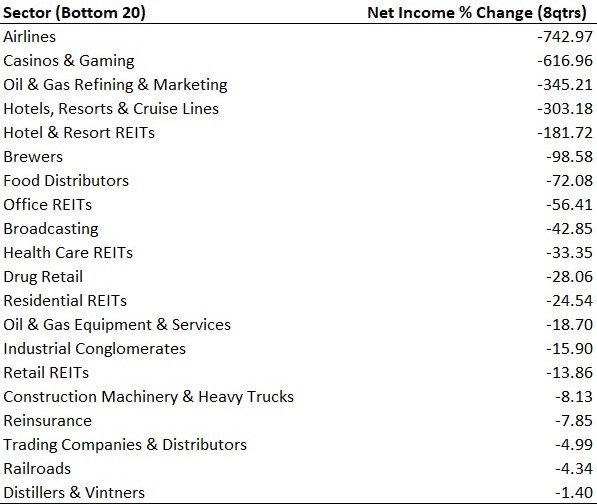 The recession has created clear winners and losers. U.S. consumers shifted spending towards work-at-home tools (computers, electronics, semiconductors, electrical components) and suburban “nesting” (homebuilders, household appliances, housewares). At the same time, they moved away from “experiential” services (airlines, casinos & gambling, hotels) and social dining and drinking (brewers, distillers & vintners, food distributors), which is unsurprising given the nature of the pandemic.

This shift in spending towards manufactured goods and away from recreational services has also come at a time where total income has been supported through fiscal stimulus. That means that although the pandemic changed what consumers are buying, those consumers retained aggregate spending power comparable to pre-pandemic levels, exacerbating the effect of the shift. With global supply chains disrupted by the pandemic, manufacturers have not been able to keep up with the rapid shift in spending.

The dual impact of shifting demand and pandemic supply shock has resulted in a rapid rise in consumer prices that differs from a typical economic recovery. While it is likely that as the economy moves into Phase III (herd immunity), spending and work habits may normalize, the timing of any normalization is highly uncertain. Large gatherings (such as concerts) remain limited, and some suggest that such gatherings will not return to pre-pandemic capacity until the population in the venue’s state (and surrounding states) reach herd immunity (at least 70% vaccinated). And if the U.S. fails to reach herd immunity, occasional COVID-19 outbreaks will likely be unavoidable and a full return to pre-pandemic habits and spending patterns may not materialize in the foreseeable future. Moreover, the shift in spending to suburban “nesting” may prove to be permanent regardless of normalization. Anecdotal evidence suggests many employees, happy with their newfound freedom from work-at-home arrangements, are preparing to or have already switched jobs in anticipation of announced return to the office policies in the fall.

The Goldilocks Zone for inflation and equities

With supply chains under duress and shifting spending patterns likely to persist longer than anticipated, we now examine equity market performance under various inflation regimes. For our analysis, we group annualized monthly CPI prints into quartiles and investigate stock market returns under each regime. 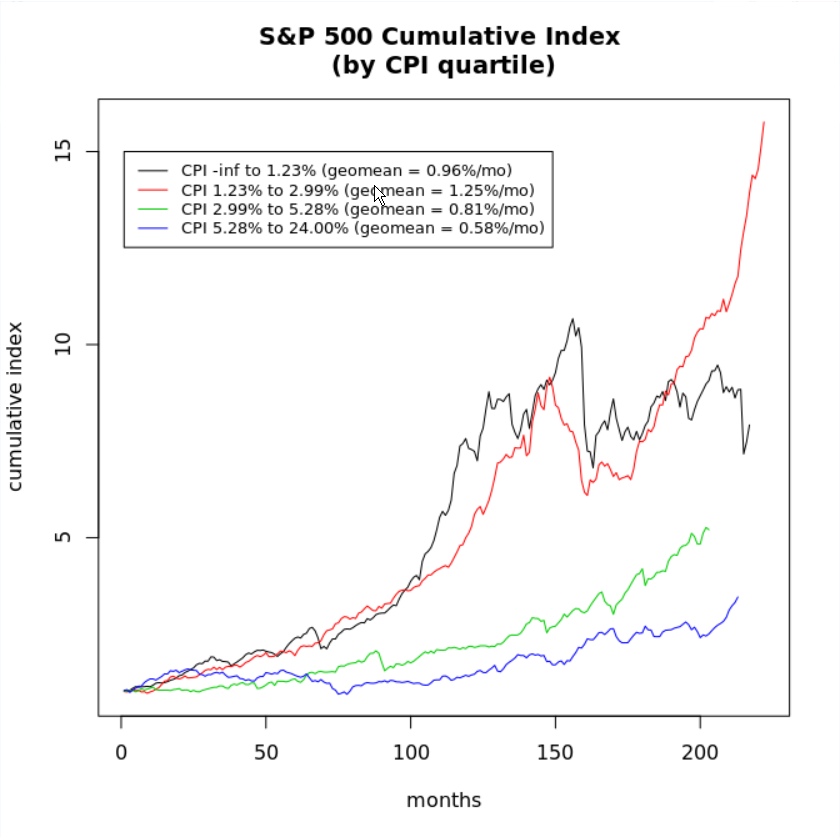 The chart above plots the cumulative returns of the S&P 500 over all months since 1950 under four different scenarios: when CPI is within the first, second, third, and fourth quartiles. It is clear that historically, the S&P 500 has had the greatest growth when CPI is in the second quartile, corresponding to moderate inflation (1.23% to 2.99%), with the geometric mean return at 1.25% per month (plotted in red). When there is above-median inflation (third and fourth quartiles), the S&P 500 has shown the lowest geometric mean returns (0.81% per month, plotted in green, and 0.58%, in blue, respectively).

The April CPI print of 9.6% annualized (0.8% m/m) is the strongest CPI print in years and firmly places CPI in the fourth quartile. Should above-median inflation persist, history suggests that investors should prepare for a period of diminished returns. How much so will depend on the Fed’s willingness to look through near-term inflation and stick to its new FAIT policy framework, in which periods of above-average inflation are tolerated to compensate for below-average periods. Of course, if in order to fight inflation the Fed elects to raise interest rates unexpectedly or signals a more hawkish posture, that will likely have a negative impact on equities. This is a complex situation that is worth monitoring closely.