In times of financial and economic crisis, asset prices fall, lenders pull back on lending, and credit markets seize. Aggressive monetary easing and quantitative easing (particular through asset purchases) are effective in plugging the gap to prevent a vicious cycle. The Federal Reserve steps in where private sector pulls back and effectively acts as the “lender of last resort.”

Beyond the extent to which quantitative easing is able to stem a metaphorical run on the bank, its ability to stimulate and inflate the economy has limits. Over the last twelve years in the U.S. and Europe, and perhaps the last thirty years in Japan, zero and/or negative interest rates combined with central bank purchases of trillions of government bonds has been unable to generate inflation, much less robust economic growth. Much of the money “printed” through quantitative easing was never recycled into the economy, but was rather left untouched on bank balance sheets in the form of cash and government securities. This most recent round of quantitative easing is no different.

As covered in our previous commentaries, the Federal Reserve increased money supply by an unprecedented amount in response to COVID-19. Since March 4, 2020, M2 has increased by over $4 trillion (+26% increase). Of this $4 trillion increase, $2.8 trillion made its way into commercial bank deposits, and roughly 76% of that $2.8 trillion remains held in cash and/or U.S. Treasury and Agency securities. Only a relatively paltry $392 billion (less than 10% of the $4 trillion) made its way to the private sector, which is hardly a cause for inflationary concern. 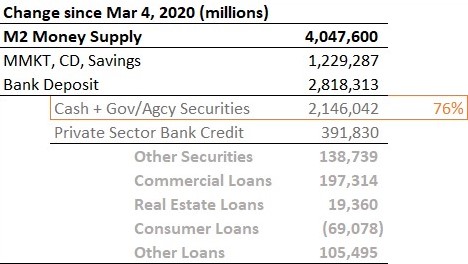 While the lack of pass-through may be attributed in part to a conservative stance and negative outlook on the economy, it also reflects a dearth of opportunity in the market. Commercial banks are incentivized to make loans to earn a spread between their costs of deposits and the loans they make into the economy. It does not benefit them to leave deposits un-invested in cash or earning the risk free rate in government obligations. Yet, their failure to increase lending despite record low interest rates and a $2.8 trillion increase in deposits suggests that the problem stems from the demand side.

Below we plot the level of bank deposits (black) against private bank credit (red) on a log basis. The data is from the Federal Reserve Board’s H.8 statistical release of assets and liabilities of U.S. commercial banks, which is reported weekly. In most periods, money supply (deposits) constrains the availability of credit available from banks. In times of strong credit demand, such as the 2000-2002 tech bubble and 2004-2006 real estate bubble (marked in the chart), bank credit can actually exceed the level of cash held on deposit–until the bubble pops. 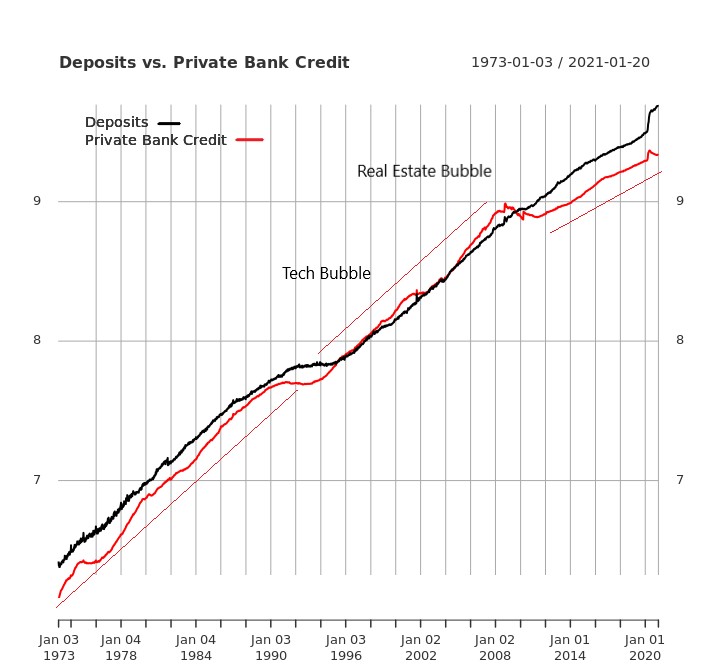 Since the Great Financial Crisis, the rate of growth of private credit has declined noticeably despite continued growth in deposits. This is reflected in the above chart by the declining slope of private bank credit from approximately 2011 onwards. The chart suggests that monetary policy acts as a soft ceiling, and not a floor, for credit in the economy. It can be taken away to slow down a hot economy where credit demand exceeds supply, but cannot be forced upon borrowers where supply exceeds demand.

To obtain a potentially useful and timely metric of credit demand, we plot below the ratio of the 12-month change in private bank credit over the change in bank deposits over the same period. We call this measure the marginal demand for credit, which represents the amount by which each dollar of deposits passes through into the economy as a private bank credit. 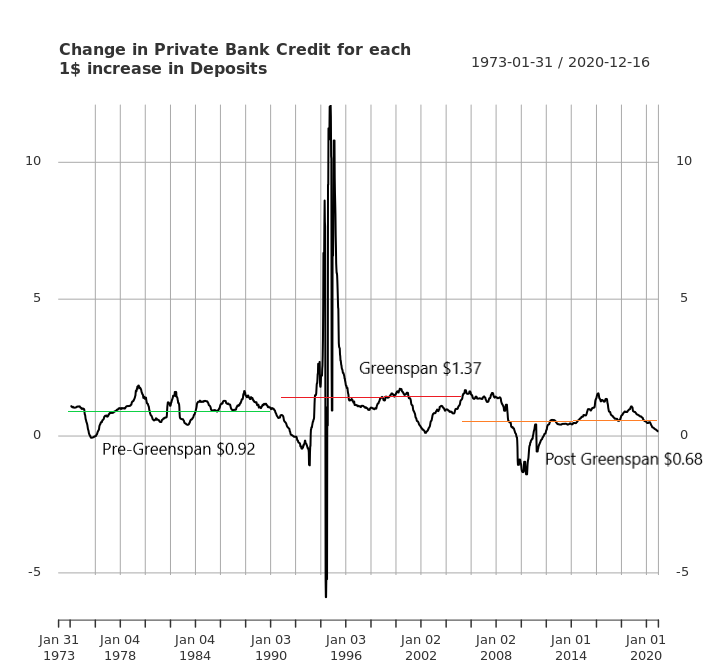 We suggest closely following these metrics if you are concerned about the supply of credit made available in response to the COVID-19 pandemic. The rising gap between bank deposits and private bank credit represents dry powder and the potential for excess if and when demand picks up. The wider the gap, the longer it will take the Fed tamp constrain the excess. Until this demand shows up, however, any attempts at further quantitative easing are potential, not kinetic, energy.