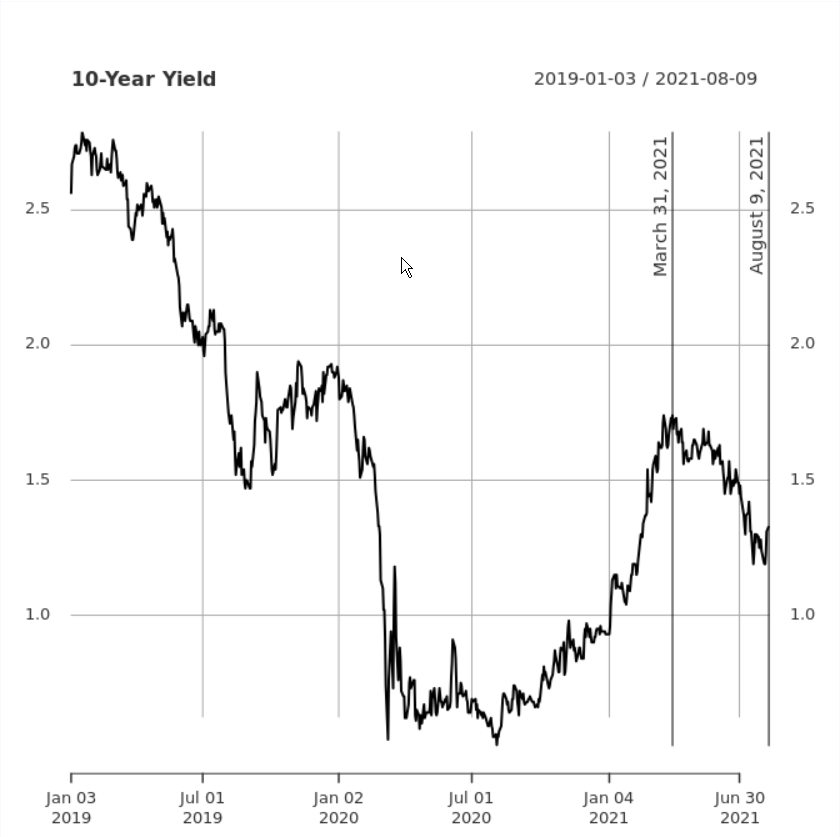 But this move quickly reversed in 2021 due to optimism from a combination of Phase 3 reopening and the widespread distribution of vaccines in the U.S. Yields retraced almost the entirety of the post-pandemic move back towards the levels of Q4 2019 and Q1 2020.

This was not to last. Since their Q1 2021 peak, yields reversed course again, falling by about -0.41%. This has happened despite macroeconomic indicators that would suggest investors would prefer riskier assets: a -3.10% drop in the unemployment rate to 5.4%, the acceleration of CPI inflation by 3.02% in just the four months intervening, and GDP growth of 1.59% in just the second quarter alone.

Falling yields caught market participants off-guard, leaving many scratching their head. This month we look at this conundrum to see what it may be telling us about the outlook for the economy.

Decomposing the move in yields

It seems at odds for inflation expectations to be unchanged and real rates (which reflect the return to capital and underlying growth potential of the economy) to have declined despite an unexpected rise in inflation and robust GDP growth since March of this year. To explain this difference, a refresher on introductory macroeconomics and the distinction between short-run and long-run macroeconomic effects may be helpful. 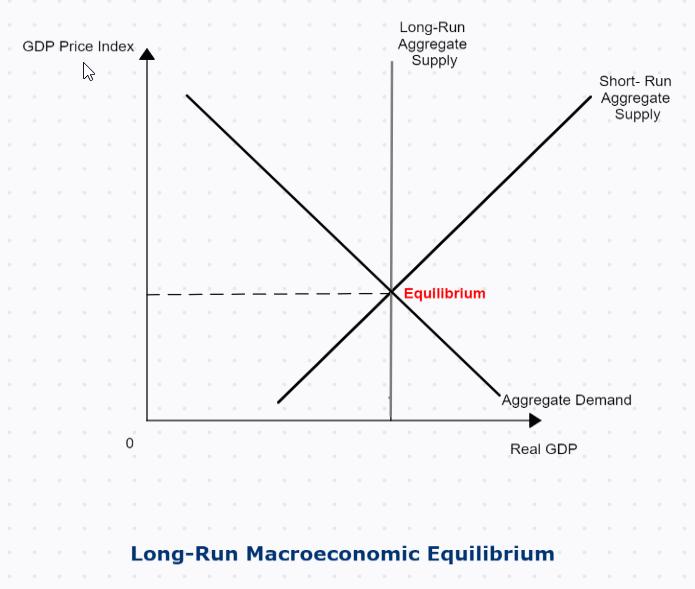 On the other hand, temporary shocks (such as a temporary decline in the labor force due to COVID-19 lockdown and pandemic risks), will decrease output and increase prices on in the short run, but ultimately converge back to the long-run equilibrium level (e.g. such as when the economy moves past Phase 1, Phase 2, and Phase 3 re-opening, and when supply chain bottlenecks ease and people return to work). 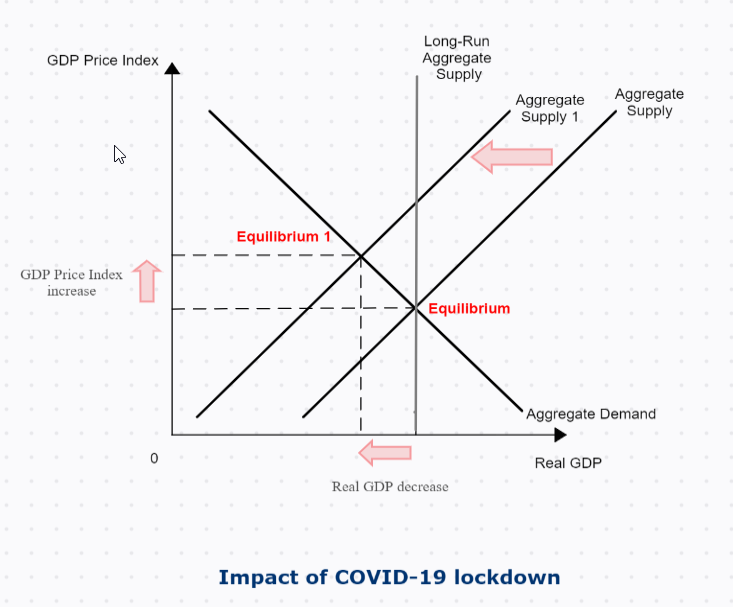 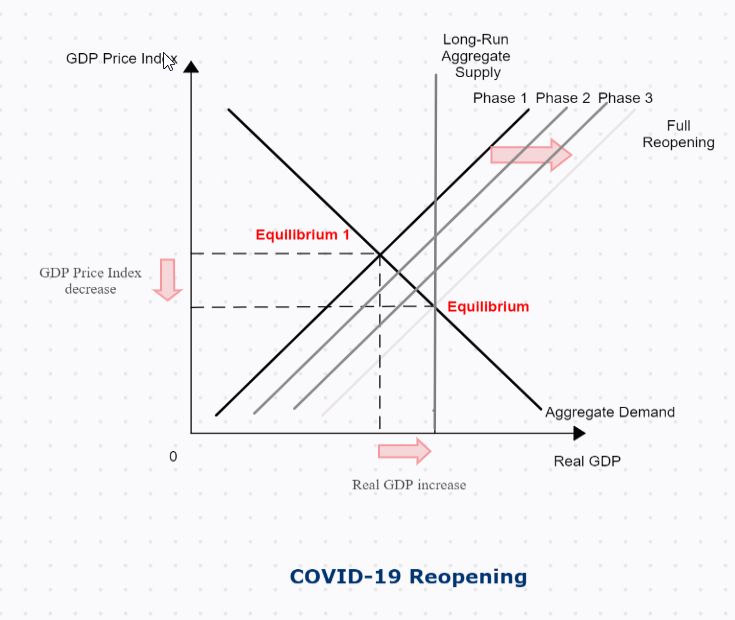 Because the 10-year yield reflects long-run expectations (not short-run), the headline yield looks through short-run effects on the economy, which are expected to normalize as re-opening progresses. Nominal 10-year yields are concerned only with the long run, which as discussed above, is only impacted by permanent shocks. As such, any short term boost to the economy due to normalization is not pertinent to 10-year interest rates. It is not necessarily inconsistent to have robust short term growth but declining long-term yields.

So what about the long run

Because 10-year yields look through recent short-run economic fluctuations due to the unwind of temporary COVID-19 restrictions, we now turn to COVID-19’s potential long-run impact. A decline in the long-run real yield of -0.41% with inflation expectations unchanged at 2.37% is consistent with a decline to long-run potential output but no rise in the aggregate price level.

The decline in long-run potential output

Long run potential output is a function of capital (K), labor (L) and total factor productivity (A), The chart below shows that since peaking in 2001, labor for participation has been on a secular decline, perhaps due to the aging of the baby boomers. COVID-19 has accelerated this trend and participation remains well below pre-COVID levels. 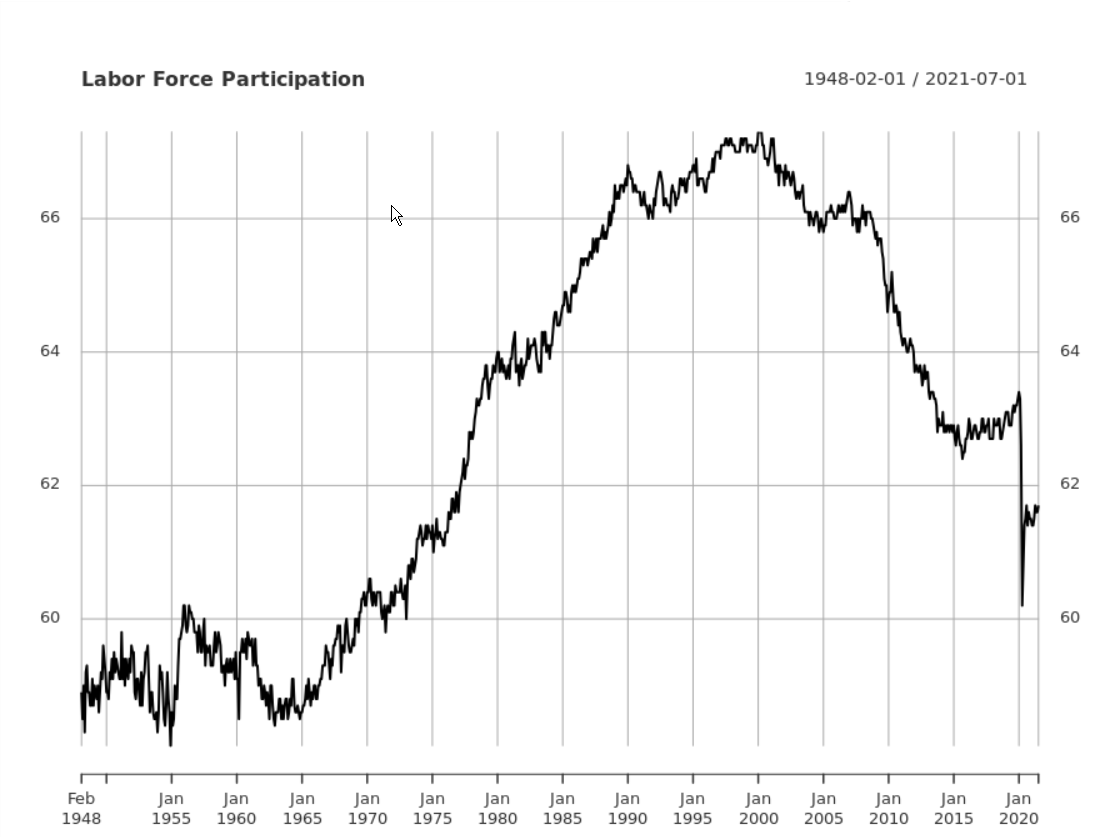 Moreover, there is reason a material portion of this decline in labor force participation may not return. In May 2020, the Bureau of Labor Statistics began collecting data on the impact of COVID-19 on unemployment and household welfare in its Household Pulse Survey. Table 2 of the survey shows the results of its survey of those not employed and the reason not employed. The table below shows that the latest survey (July 5, 2021) shows a net decline of about -15mm unemployed since its first survey (May 5, 2020). Those unemployed due to COVID related job layoffs and on furlough declined by -37mm. On the other hand, and as has been suggested in recent headlines, there has been an increase of +18mm unemployed since May of last year due to COVID-related reasons (such as childcare and fear of contracting COVID) and “other.” 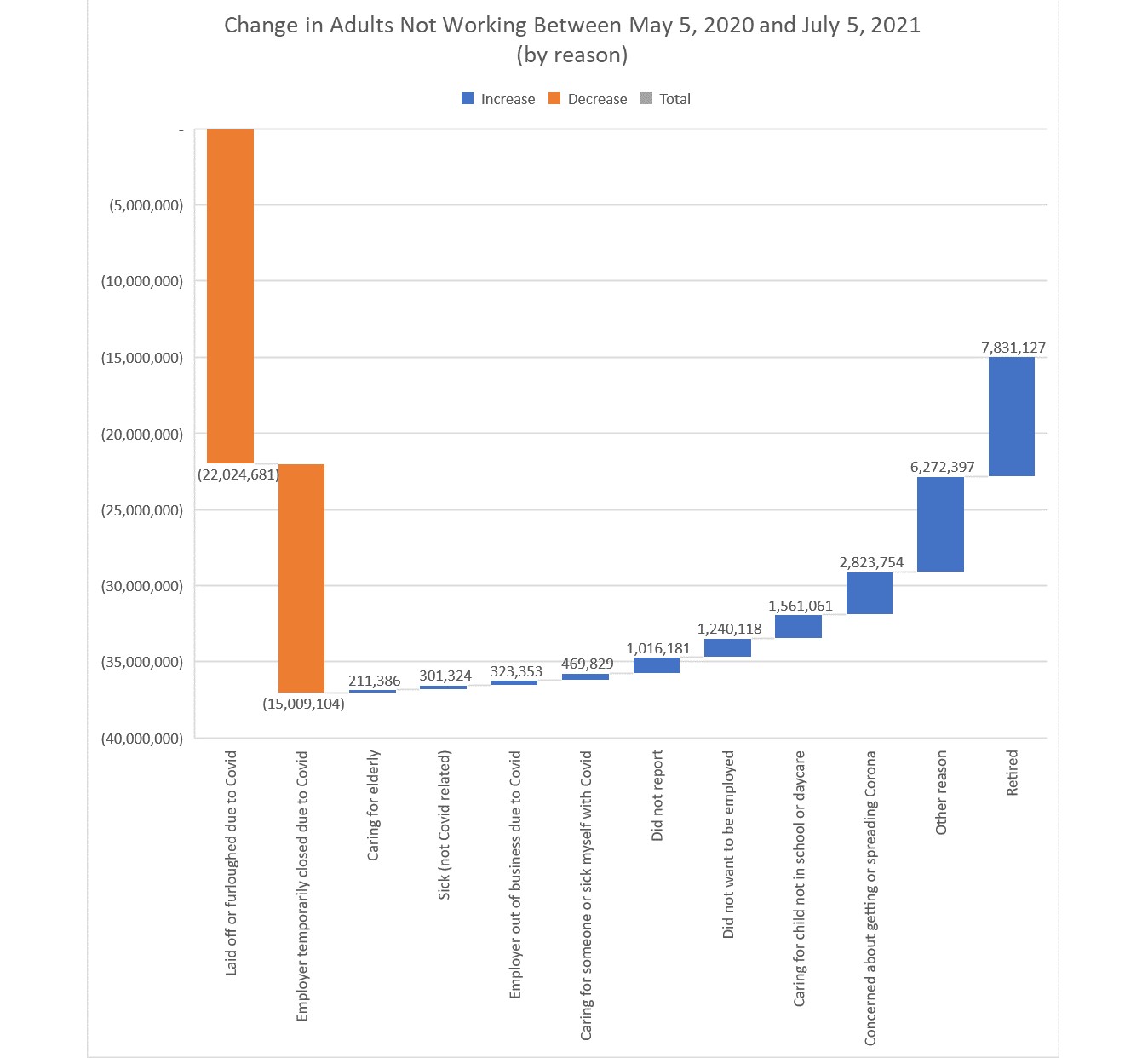 While the majority of the categories of unemployed that have increased are due to COVID-19 related reasons and “other,” the largest single increase over this period is from the category of those not working because they have retired. Over this period, over 7 million individuals have chosen to leave the labor force due to retirement, which perhaps not coincidentally is also the demographic most susceptible to COVID-19. While some may eventually be convinced to re-enter to workforce, it is likely safe to assume most will not and that this increase in unemployed due to retirement is permanent and will not come back with re-opening. 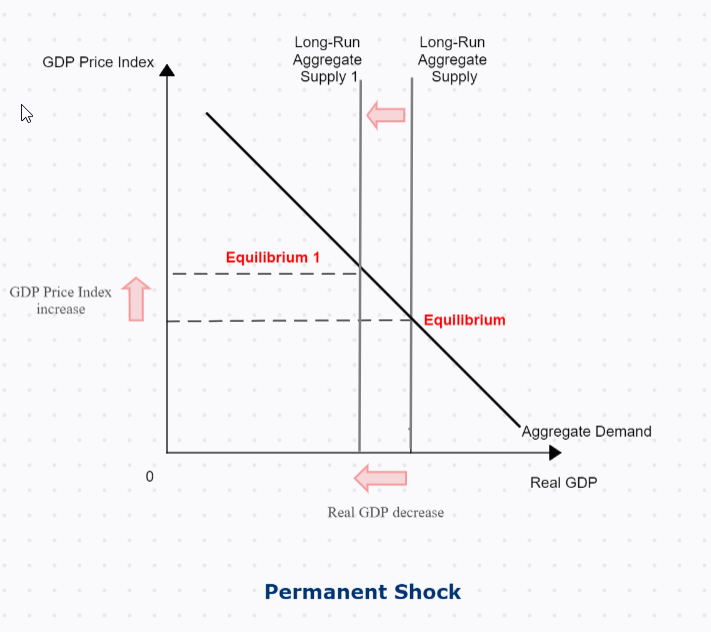 The Hawkish Fed and unwinding of fiscal stimulus

At the same time, with inflation running well above the Fed’s 2% target since March, the Fed has become increasingly hawkish and has moved forward its timeline for the first hike. A reduction in monetary policy support combined with (i) the market looking toward the expiration of extended unemployment benefits in September and (ii) the rise of the Delta variant posing a risk to the recovery in demand for services, leisure and hospitality has put a damper on aggregate demand. 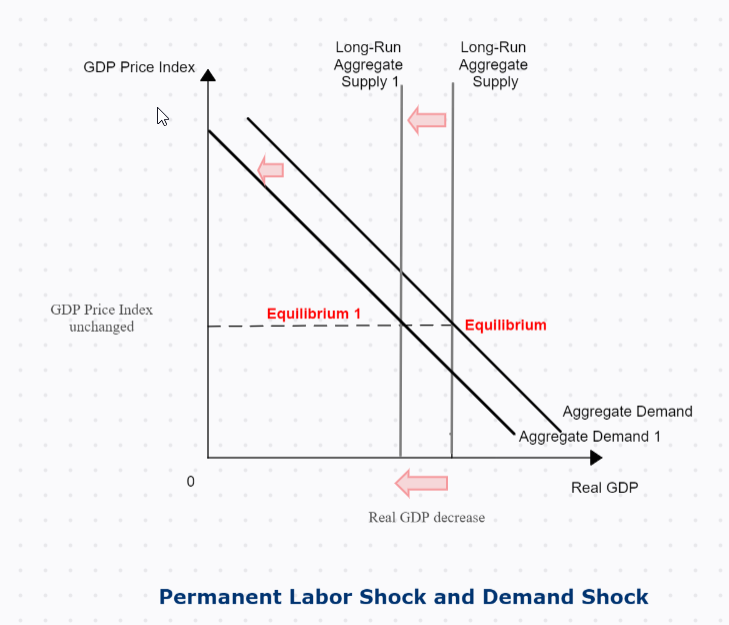 Taken together, it is clear from the chart above that the combination of (a) an acceleration in the decline in the labor participation force, a material portion of which is permanent, and (b) decline in aggregate demand due to the rise of Delta, and the coming unwind of monetary and fiscal stimulus does well indeed explain a situation where long-run output declines but the aggregate price level (inflation) is unchanged (Equilibrium 1, above). With long-run output fixed, any further attempt to be hawkish will only serve to further suppress aggregate demand and therefore aggregate price levels in the long run. It’s not surprising, therefore, that the Fed’s hawkish tilt has led to lower long-term yields since March.

This analysis also highlights an interesting and perhaps perverse fact. Because there is little the Fed can do to affect long-run aggregate supply and therefore long-run potential output (which are both a function of real variables such as labor supply), the Fed has very little control over long run real rates. The Fed can only affect long-run interest rates through its ability to raise the aggregate price level (inflation) through monetary easing, and rates will only rise in the long run if the Fed commits to more monetary easing (which shifts aggregate demand to the right) not less.

Thus, the mystery of falling real rates against a backdrop of falling unemployment, rising CPI inflation, and growing GDP is solved. While delays and obstacles to re-opening due to the persistence of COVID-19 and its various new strains may keep price levels elevated in coming months (some say up to 5 years), long-run rates (10y and 30y) look through pandemic imposed constraints to price instead the long-run potential of the economy. Because the pandemic is a supply shock rather than a demand shock typical of the business cycles seen in the past 30-40 years, the old bond playbook doesn’t apply. As shown in the long-run charts above, any attempt by the Fed to address inflation induced by a negative supply shock (over which it has no control) through tighter monetary policy and reducing bond purchases only serves to reduce long-term rates by lowering the long-run price level, not raise them.

These are the limits of monetary policy. Long-term bond investors need to look through short term deviations and more closely examine the structural trends of the U.S. economy and how they might be changed by governmental or other action.