A rocky October saw U.S. equities drop -2.66% going into the U.S. Presidential election. Negative sentiment from rising COVID-19 cases in Europe and the U.S., combined with the breakdown of Phase 4 stimulus talks and general election risk contributed to the decline. Economic data, however, was more upbeat. Q3 GDP printed at +33% (annualized rate on the quarter) and strong demand for single family homes and durable goods contributed significantly to the snapback. Service sector demand, however, continues to suffer from pandemic restrictions.

Turning to perhaps the most anticipated event of the year, the U.S. Presidential election continues to hang in the balance with vital swing states still within 1% margins in favor of Biden. President Trump has already gone on the offensive, initiating legal action in Pennsylvania and threatening it in other states. Just as important, but much less covered, is the outcome of the U.S. Senate election results. Last month we covered the likely market reaction to a drawn out contested election and this month we focus on the potential impact of a unified government on market returns.

United We Stand, Divided We Fall

Below we tabulate the return of the Dow Jones Industrial Average in the (i) two months following an election and (ii) the twelve months following an election, for each U.S. Presidential election since 1896. We also note the political party holding the Presidency, Senate and House, respectively. Because this analysis focuses on the presence or absence of a unified government, the historical ideological shift between the Democratic and Republican Parties in the past century does not impact it. 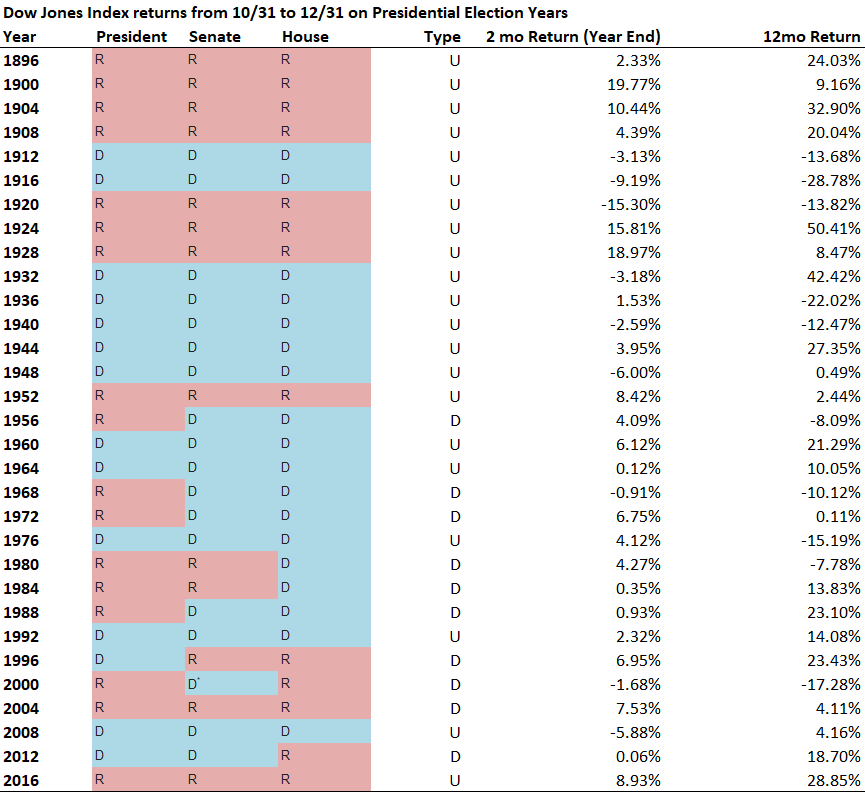 The first insight we glean from the data is that there is no significant difference in the short-term (two-month) return between elections that result in unified and divided governments, 2.83% (divided) and 2.95% (unified) respectively. There is, however, a significant difference in the distribution of returns, with a unified outcome leading to a much wider dispersion of short-term returns to year-end (-15.30%/+18.97% min/max, unified) vs ( -1.68%/+7.53% min/max, divided). This holds true even if we look only at those elections in the more stable modern era from 1968 onwards. 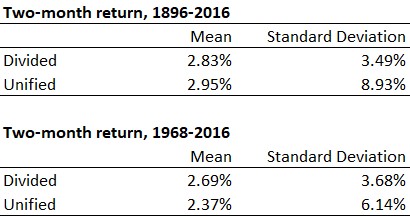 Turning to longer-term market returns (i.e., 12 months following), we see that a unified government leads to higher average returns both in the entire sample (+9.06% vs +4.00% divided) and in the modern (post-1968) era (+7.98% vs. +5.34% divided). The standard deviation of outcomes is also considerably less dispersed in proportion to the mean return. This data is consistent with the “Blue Wave” narrative: that a unified government is able to push through more sweeping actions to support the economy (either through tax cuts or fiscal stimulus, depending on the party). A divided government, on the other hand, while more stable will also also lead to less stimulative outcomes, on average. 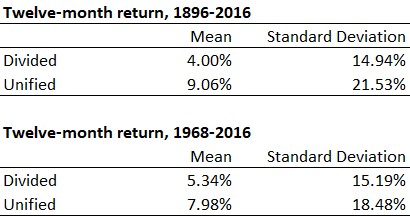 As of writing, former Vice President Joe Biden and the Democrats are in the lead for the White House and the U.S. House of Representatives, respectively. The U.S. Senate race is close but it appears the Republican majority will prevail. At this uncertain juncture, empirical evidence suggests that it will be worth watching closely for clues on how 2021 might fare for U.S. equity markets.