At the annual Jackson Hole Symposium in August, Fed Chair Jerome Powell announced the outcome of the Fed’s multi-year monetary policy framework review. The Fed intends to adopt a “flexible form of average inflation targeting” (or FAIT) that (1) considers only “shortfalls” of employment rather than “deviations” to the upside and downside, and (2) seeks to achieve inflation that averages 2% over time, specifically by tolerating moderate above-target inflation to compensate for periods of undershoot. Powell’s announcement heralded an apparently significant shift from the Fed’s prior “balanced approach” framework, where its reaction function responded symmetrically with respect to the labor market and its inflation target was fixed at 2%, irrespective of the recent past, as described by then-Fed Chair Ben Bernanke in 2012.

Markets reacted with a sharp rise in long-term interest rates, higher market-implied long-term inflation rates, and a steeper yield curve. These moves subsequently reversed, for the large part, in the weeks following the announcement, reflecting a fundamental truth about the Fed’s framework review: as we explain below, we believe the much ballyhooed framework shift simply acknowledges what has been the Fed’s actual policy since at least 2006.

In his seminal 1993 paper, Professor John Taylor introduced a simple equation that describes the Fed’s policy rate (the federal funds rate) using the Fed’s so-called dual mandate as inputs: (a) inflation and (b) the output gap. While there are numerous variations of the Taylor rule, for our purposes, we follow Taylor’s 1999 paper, which places more emphasis on the output gap and has been found to be most consistent with the “balanced approach” rule announced by Bernanke in 2012. That formula is as follows:

To proxy what Bernanke described in 2012 as the Fed’s “balanced approach,” we use the Taylor rule and (i) a 2% inflation target, (ii) the Laubach-Williams model 1-sided estimate of the Natural Real Interest Rate, (iii) 2x the U3 unemployment gap, following the CBO’s measure of the natural rate of unemployment, and (iv) Core PCE inflation, 4-quarter, which can be found using the Federal Reserve Bank of Atlanta’s Taylor rule calculator. We plot below the prescribed policy rate from this model against the actual federal funds rate, beginning with the Greenspan era. 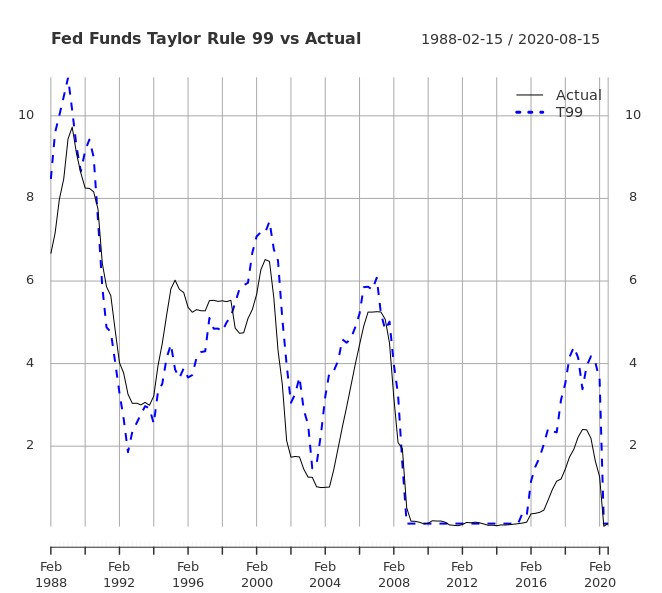 At first glance, the Taylor rule appears to reasonably approximate the Fed’s actual policy. However, the differences are significant. First, on the downside, the Fed almost always cuts at least as soon, and as fast as, but no later than the model would prescribe in response to recessions. Second, on the way up, aside from the 1997 hiking cycle, the Fed has always been slower to hike as well as peaked at lower rates than the “balanced approach” model would suggest. During the most recent hiking cycle of 2016 to 2018, the Fed’s reaction to rising inflation and strength in the labor market was particularly muted, hiking nearly a year later than the Taylor rule would prescribe and peaking at just 2.5% versus a model-implied 4.5%. Rather than being “balanced,” the Fed’s actual policy reaction function has clearly shown an asymmetric bias favoring lower rates and a cautious approach on the upside.

To proxy what Powell describes as a “flexible form of average inflation targeting”, we use a form of the Taylor rule that (i) considers only “shortfalls” of employment and (ii) seeks to achieve a 5-year moving inflation target that equals 2% when averaged with actual realized inflation over the previous 5-year period. Specifically, to replicate a one-sided reaction function to the unemployment gap, we modify the unemployment data by keeping the data when the gap is negative and set it 0 otherwise:

, to vary over time. We set the target such that the average between (i) the inflation target and (ii) realized inflation averaged over the preceding 5-year period is equal to 2%. For example, if realized inflation averaged over the preceding 5 years was 1%, the Fed would need to set a target of 3% over a 5-year horizon such that the 10-year average spanning the entire window equals (1%+3%)/2 = 2%. The equation we apply is as follows:

Below we add the policy path prescribed by our modified Taylor rule (in yellow) to our previous plot of the “balanced approach” Taylor rule against the actual federal funds rate: 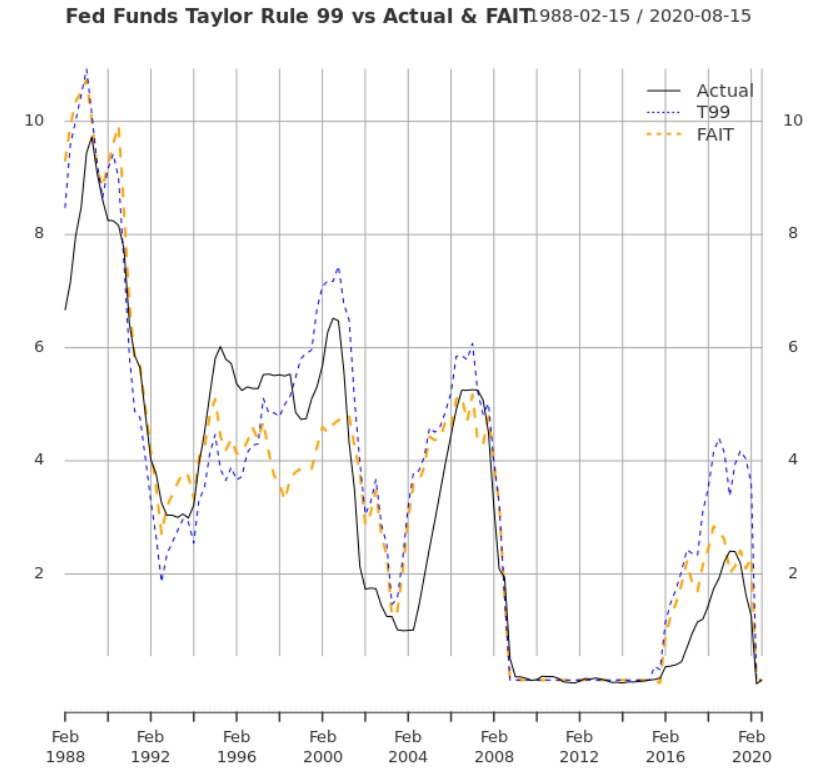 The modified Taylor rule generally accords more closely with actual Fed policy over the past 30 years than the “balanced approach” rule, particularly from 2006 onward. Hence, our earlier observation that the much-anticipated policy shift announced by the Fed is a bit of smoke and mirrors. In practice, the Fed has long been implementing the so-called “flexible form of average inflation targeting.”

All Out Of Bullets

Despite the anticipation and fanfare surrounding the finalization of the Fed’s policy framework review, our analysis finds that it simply acknowledges and ratifies existing practice. The Fed’s actual realized policy stance for over a decade has been far from “balanced” but rather biased towards aggressively supporting growth in downturns and cautious to avoid preempting growth during expansions. Moreover, despite paying lip service to the Phillips curve relationship between unemployment and inflation (whereby decreased unemployment is associated with higher inflation), it is no secret that the Fed has questioned it for some time, further underscoring the Fed’s bias towards not preempting growth by prematurely hiking rates. Absent further concrete policy support in September, which seems unlikely given equity markets near all-time highs, we expect the market to begin pricing a more passive Fed going forward.