In September, election risk came to the fore with President Trump refusing to commit to an orderly transition of power while casting doubt on the legitimacy of mail-in ballots ahead of the first round of debates. Developments since the end of September, in particular President Trump’s admission to Walter Reed hospital after testing positive for COVID-19, have further increased uncertainty surrounding the election.

This month we review market action in the weeks following the Bush-Gore election in 2000 as a guide to what may happen in the event of an uncertain or contested election. In that contest, on November 8, 2000, victory in Florida was declared in favor of George W. Bush with a margin of victory of only 1,784 votes. This triggered a statutorily-mandated recount that saw that margin decline to a mere 327 votes. A legal battle ensued regarding whether time consuming manual recounts would be allowed and through what date, with the Supreme Court of Florida ordering a manual recount on December 8, only to be overruled by the  Supreme Court of the United States on December 12, a mere two days after hearing oral arguments.

With the use of mail-in ballots expected to rise significantly in response to concerns over the risks of a spread of COVID-19 in connection with in-person voting, President Trump is already beginning to cast doubt on the legitimacy of this year’s election by attacking mail-in ballots as susceptible to fraud. We look to the Bush-Gore election for guidance on how markets may respond to a contested election result next month.

U.S. equities responded as expected to the uncertainty introduced by the Bush-Gore controversy, falling approximately -5% from Election Day at the trough. The decline was short-lived, however, and stocks otherwise held in reasonably well. Crude oil, on the other hand, saw a brief spike, only to decline sharply into and through the Supreme Court’s decision, its fall reaching -20% at the lows. 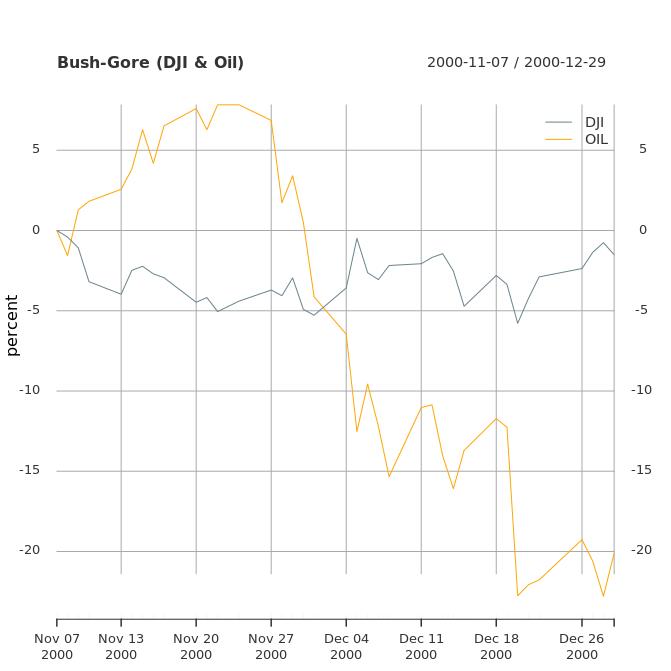 The U.S. Dollar trade weighted index (DXY) saw an initial knee-jerk rally in the first two weeks following Election Day, as would be expected in a flight-to-quality trade out of risky currencies and into the USD global reserve currency, only to decline rapidly into and through the Supreme Court’s December 12 decision for a decline of close to -5% by year-end. Gold, as would be expected from a falling dollar and rising uncertainty in markets, benefited and rose to nearly +4% at the peak. 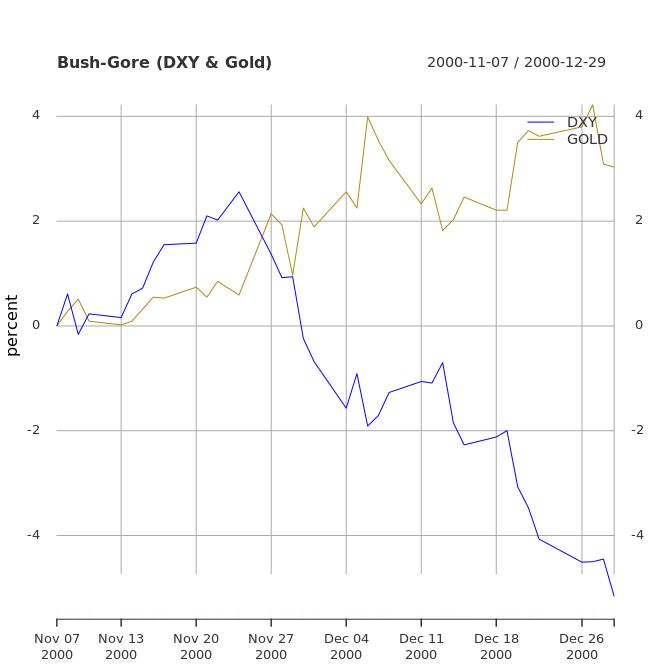 Finally, turning to the fixed-income market, U.S. Treasuries rallied as expected and yields declined a cumulative -50 basis points by the December 12 decision. High-yield spreads, on the other hand, widened by over 125 basis points during the same period. 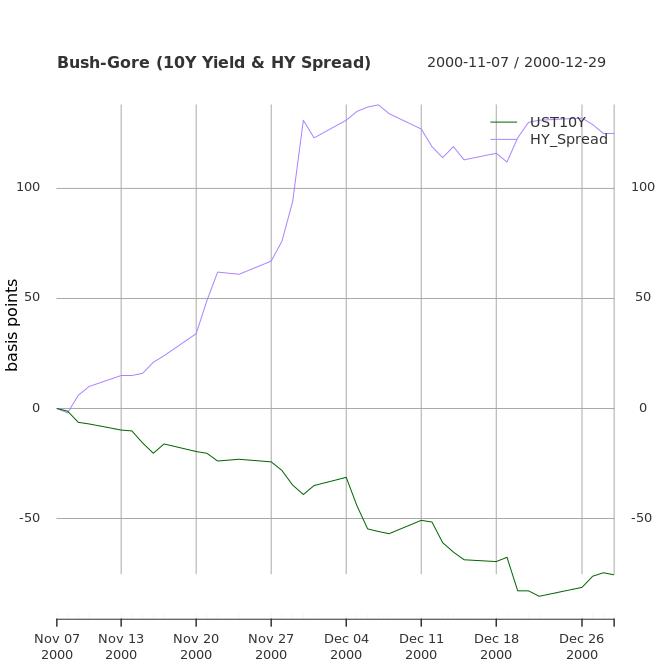 Our review of market activity after the Bush-Gore controversy shows that there was an expected flight from riskier assets to safer ones. That suggests that if President Trump should lose the election and the contest the results, equities may suffer, but only modestly so, crude oil could suffer steep losses, and a defensive portfolio away from credit spread products and more heavily tilted toward gold and government bonds may be best positioned for election uncertainty. Indeed, defensive positioning may be particularly appropriate because in many ways the circumstances of the 2020 election are more dire than those of 2000. The acute political polarization of the United States, economic and social turbulence, the ongoing pandemic, and the prospect of a protracted dispute over the election results mean that the stakes for the upcoming election are enormous, and market volatility in response to uncertainty caused by the same may be heightened. As Mark Twain put it, history doesn’t repeat itself but it often rhymes.